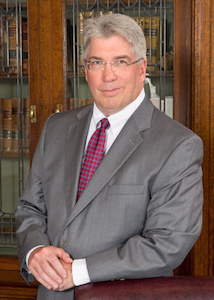 Attorney Jeffrey S. Beeler concentrates his practice at Heinlein Beeler Mingace & Heineman, P.C. on representing those who have been injured through the fault of others. His practice is focused on helping injured individuals though the civil litigation process, from initial case evaluation and investigation through trial and appeal, if necessary.

Attorney Beeler began his legal practice in 1992 working as a Judicial Clerk for Associate Justice Samuel W. Collins and Associate Justice Paul L. Rudman, both of the Supreme Judicial Court of Maine. Through this Appellate Court clerkship with Maine 's highest court, Attorney Beeler gained valuable insight in to the functioning of the court system and the need for effective and diligent representation at the trial level in order to protect a client's rights. This experience, which included analyzing submissions to the Court while crediting or discrediting statements and arguments based on the law and facts of a case, is of great value as he works to obtain full and fair compensation for his clients. After his clerkship in 1993, Attorney Beeler joined the firm of Newman, Heineman & Itzkowitz. Within two years, Attorney Beeler enlisted the assistance of the U.S. Food and Drug Administration (FDA) as amicus curiae, for the first time, in support of the rights of a victim of a defective medical device to seek compensation from a medical device manufacturer in court in a case that ultimately made its way to the U.S. Supreme Court.

Attorney Beeler has been selected as a Super Lawyer every year since 2011 and as a New England Super Lawyer in 2014. Click here for more information on the Super Lawyer Rating.

Attorney Beeler has a "Superb" rating from AVVO. Click here for more information on the AVVO rating process.

Attorney Beeler has been rated AV Preeminent by Martindale-Hubbell since 2001.

90% of Practice Devoted to Litigation